One is a student, and one does not have a lot of money, although one is fortunate to have more than others and counts her blessings daily. But one had decided a while ago now to eat cheaply whenever possible; one signed up to receive a most cost-effective delivery of seasonal, local produce every week. One resolved to eat this produce, because it was cheap and good for her, even if she did not like them.

One abhors leeks. And leeks she receives every damn week.

I am sick to death of leeks (and incidentally also of speaking of myself as ‘one’, so let’s have no more of that). But every damn week I get at least two of them. Over Christmas I received a double delivery of fruits and vegetables — WITH FIVE LEEKS IN THE LOT. I felt myself going weak in the knees. Had to sit down calmly for a moment to think how on earth I could use these up, because I need to eat, and I need to save as much money as possible, so I cannot throw away food. That, and it would wasteful, which is disrespectful to nature and to those who have less than I, and I am (I hope) neither wasteful nor disrespectful.

What could possibly mask the ghastly, sickening flavour of these obscenely long and ugly onions? How could I bring myself to swallow this stringy, fibrous vegetable? Only one answer came to mind. 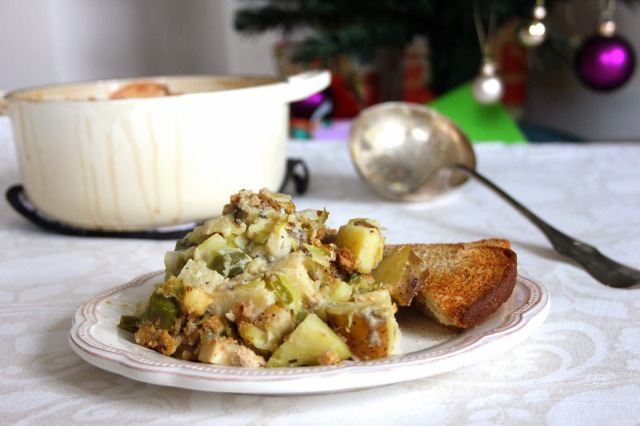 I rolled up my sleeves, cracked open my tin of nutritional yeast, and set to making dinner.

Notes:
* If you wish to make this recipe gluten-free, use gluten-free bread for the breadcrumb topping.
* I’m not too specific on the potatoes. Use any that you have on hand, except sweet potatoes, as I don’t think they would taste too great with the leeks and cheese (not to mention the horribly clashing colour). Keep an eye on your potatoes while they’re cooking; different sorts may need different cooking times before they are tender.

Parboil the potatoes, leeks and celeriac (i.e. boil for 10 minutes) in a large heavy-bottomed pot, then drain.

If it is ovenproof, you may use the same pot to bake the vegetables in the oven. In that case, grease it with some vegan butter. Set aside for now.

To prepare the sauce, place a small saucepan over medium heat. Melt 1 tsp vegan butter and lightly fry to garlic. Throw in the herbs and nutmeg then pour in the soya milk, all the while stirring continuously. Finally add in 4 tbsp of nutritional yeast. Keep stirring while the sauce reduces; you will need to simmer the sauce for about fifteen minutes. Take off the heat.

Place the parboiled vegetables in the greased heavy-bottomed dish, cover with the sauce, sprinkle over the breadcrumbs and 1 tbsp nutritional yeast, then bake for 30 minutes. If you wish to incorporate vegan cheese cubes, stir them in with the vegetables.

Leave a Reply to The Vegan Cookie Fairy Cancel reply 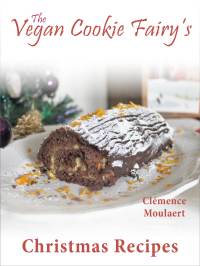 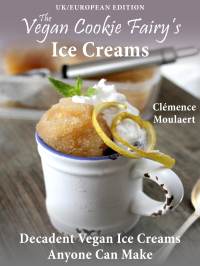